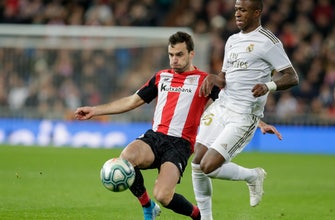 Real Madrid is about to add another Brazilian teenager to its squad.

After signing youngsters Vinícius Júnior and Rodrygo in recent seasons, the Spanish club is close to bringing in 17-year-old Reinier from Brazilian club Flamengo. The transfer is expected to be completed in the coming days, according to Brazilian and Spanish media.

“Let’s wait and see,” Reinier said while training with Brazil’s under-23 squad on Sunday.

The pending transfer has dominated the news about Real Madrid, which is in a tight race for the Spanish league title. Madrid won 3-0 at Getafe on Saturday to move level on points with Barcelonaat the top of the standings at the halfway point.

Reinier, who will soon turn 18, is a creative attacking midfielder touted as one of the most promising youngsters in Brazilian soccer. He helped Flamengo win last year’s Brazilian league and the Copa Libertadores, South America’s most important club competition.

Flamengo is the same Brazilian club where Vinícius Júnior played when he attracted Real Madrid’s attention as a teenager a few years ago. Reinier scored six goals in 15 matches as a professional with the club, Brazil’s most popular.

Like Vinícius Júnior at the time he was signed, Reinier played only a few matches as a professional before impressing Madrid and getting the Spanish powerhouse to make a bet on him.

It was a similar case with Rodrygo, who was at Santos and was also was a teen when Madrid came after him. Both initially played with Madrid’s “B” team before making their way into the main squad, and that should be the same path for Reinier if he is signed.

Just like Vinícius Júnior and Rodrygo, Reinier has been a regular with Brazil’s youth squads since an early age.

Of the four teams playing in the revamped Spanish Super Cup this week in Saudi Arabia, only Barcelona failed to win its league match this weekend. The league leaders were held to a 2-2 draw at last-place Espanyol.

Atlético Madrid, Barcelona’s opponent in the first semifinal match of the “Final Four” format that is debuting in the Spanish Super Cup this year, topped Levante 2-1 at home.

Real Madrid won at Getafe 3-0, while its opponent in the other Super Cup semifinal match — Valencia — defeated Eibar 1-0 at home.

Both Real Madrid and Atlético Madrid had their goalkeepers to thank for their weekend victories.

Jan Oblak was crucial in Atlético’s 2-1 win over Levante, making a couple of superb saves late in the game at the Wanda Metropolitano Stadium on Saturday.

Earlier in the day, Thibaut Courtois had an outstanding performance to help Madrid keep a clean sheet against Getafe.

Madrid and Atlético have the league’s best defense at the midway point, each conceding only 12 goals in 19 matches.

Getafe player Marc Cucurella defended himself from accusations he made racist insults against Real Madrid defender Éder Militão on Saturday.

Television images showed what could be interpreted as Cucurella calling Militão a monkey, but the Getafe player gave a different account on Twitter, saying he used a similar-sounding word as monkey while telling Militão to shut up.

The 21-year-old Cucurella, a left back who is a regular in Spain’s youth squads, is playing for Getafe on loan from Barcelona.

Wu Lei became the first Chinese player to score against Barcelona when he netted an 88th-minute equalizer for Espanyol on Saturday.

“I’m happy to have scored the goal that helped the team earn this important point,” Wu said.

In his second season with Espanyol, the forward is enjoying his best scoring streak with the club, with three goals in his last three matches. He scored two goals in the team’s 2-0 win over Lleida Esportiu in the Copa del Rey last month.